History of The Thompson Summer Cottage 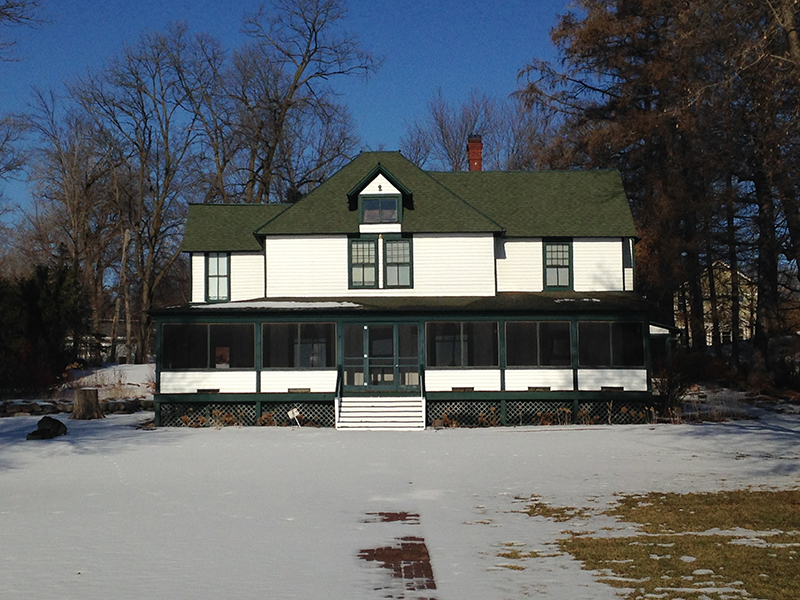 As the railroad expanded westward, so did many of the vacationers that once visited Lake Minnetonka.  With the fewer amount of vacationers, lakeside summer homes became common.  Among the first was the Thompson Summer Cottage.

Most likely you’ve passed this Queen Anne gem dozens of times as you’ve wound around the shoreline on County Road 15.  Perhaps you’ve even been stuck right outside as you approached the westbound stoplight at county road 19 during rush hour traffic.

Charles Telford Thompson, an attorney and civil leader purchased the land from James J. Hill in 1886.  A year later the cottage was built in 1887.  The home was strictly used as a summer house and continues to this days.  Guests originally arrived from Minneapolis by train or by streetcar boat via Excelsior.  The home was accessed via the railroad and horse path that ran along the rear of the home.  You couldn’t drive through the sloping front lawn until 1924, when County Road 15 was built.

The home is situated on Lafayette Bay and down the shoreline from the old Lafayette Landing, the once regular stop on the streetcar boat line in Minnetonka...

The best phrase to describe the 2014 Lake Minnetonka Luxury market (the top 10% of sales in the local market) is the continuation of 2013's recovery.  Below are the main talking points for the luxury market starting with a surprising stat.  There were 190 buyers who closed on homes in the luxury market for the year, this equated to a 10% drop in the total number of buyers compared to 2013.  The $1.5M to $1.75M price range was the most affected with the drop as only 8 buyers closed in this range, a 65% decrease from 2013 and the largest percentage drop in the luxury market price ranges.   Staying in that price range, the supply of homes remain the highest at 22 months of inventory as we head into 2015.  On the bright side, the $2.5 million and above price range brought in 26 buyers, an 85% increase over 2013.  The Median and Average sale price for the 2014 Lake Minnetonka luxury home market remained mostly flat at $1,199,000 and $1,489,000 respectively.  The statistics for percent of original price received experienced a slight increase of 1.34% to 90.2% while days on market dropped to 185, the lowest level since 2006.   $800K to $900K continued to be the most active...